Troop 7 set off with an impressive lineup of 12 adults and 16 scouts for the Robins Air Force Base Friday night at 6pm.   Kudos to the many young scouts who made this their first camping trip! 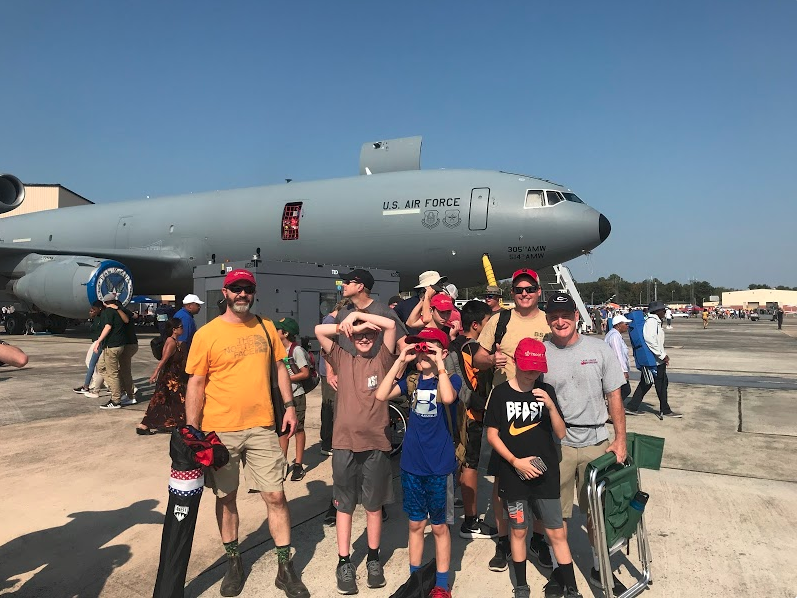 The advance recon team of Rob/Evan P Bucky/Tucker K were met with some skeptical looks from steely eyed Airmen guarding Gate 3 when they arrived, but after locating, in military fashion, the correct acronym, the EAL (Entry Authorization List) from Senior Airman Owings, Troop 7 was on their way to the campsite.

We awoke at 0700 our hearts swelled with scout spirit and patriotism as we launched into our respective breakfasts of: Phillips patrol – bagels Sunny D & bananas Brantley patrol cheerios milk and apples.    After arriving at the shuttle stop helping a few soldiers’ wives wrangle multiple toddlers and tricky double strollers, we drove to the airshow on the north end of the base.

On the ride back to camp it began to rain in earnest, ditches overflowing,  and we wondered if we might need Naval Support?   The south end of the base had been deluged and windblown by a sudden rainstorm, and most of the troop found their tents with an inch of water inside, in spite of rain flies.

As we began to wring out our sleeping bags, some of the boys swam laps in their tents, we decided to eat our hamburger helper/tacos and head home.